Anna Kreisling, the ‘White Wolf of the Luftwaffe’

The Junkers Ju 390 was a German aircraft intended to be used as a heavy transport, maritime patrol aircraft, and long-range bomber, a long-range derivative of the Ju 290. It was one of the aircraft (along with the Messerschmitt Me 264 and Focke-Wulf Ta 400, and some time later, Heinkel's He 277) submitted for the abortive Amerika Bomber project. 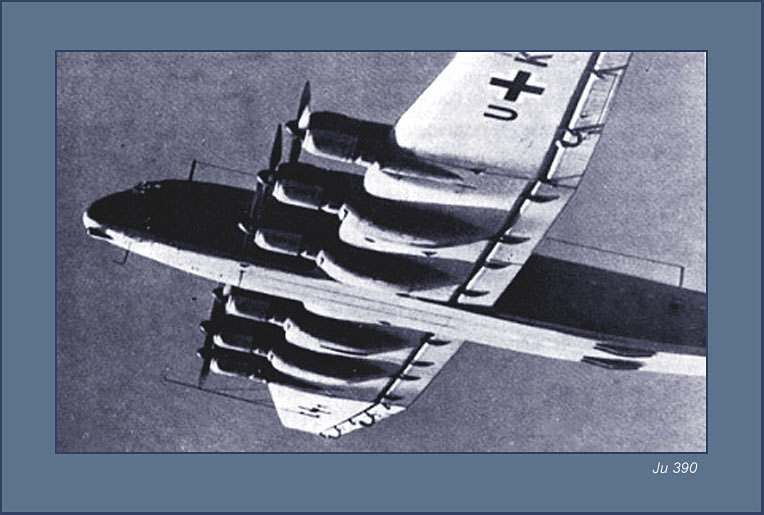 Two prototypes were created by attaching an extra pair of inner-wing segments onto the wings of basic Ju 90 and Ju 290 airframes, and adding new sections to lengthen the fuselages.

The first prototype, the V1, (bearing Stammkennzeichen code of GH+UK), was modified from the Ju 90 V6 airframe (Werknummer J4918, civil registration D-AOKD from July 1940 to April 1941, then to the Luftwaffe as KH+XC from April 1941 through April 1942, then returned to Junkers and used for Ju 390 V1 construction). It made its maiden flight on 20 October 1943 and performed well, resulting in an order for 26 aircraft, to be designated Ju 390 A-1. None of these were actually built by the time that the project was cancelled (along with Ju 290 production) in mid-1944.

The maritime reconnaissance and long-range bomber versions were to be designated the Ju 390 B and Ju 390 C, respectively. It has been suggested that the bomber could have carried the Messerschmitt Me 328 parasite fighter for self-defense, and some test flights are believed to have been performed by a Ju 390 prototype equipped with the anti-shipping Fritz X guided glide bomb.

The V1 was constructed and largely assembled at Junkers' plant at Dessau, Germany, and the first test flight took place on 20 October 1943. Its performance was satisfactory enough that the Air Ministry ordered 26 in addition to the two prototypes. However, the contracts for the 26 Ju 390s were cancelled in June 1944 and all work ceased in September of that year.

On 26 November 1943, the Ju 390 V1 - with many other new aircraft and prototypes - was shown to Adolf Hitler at Insterburg, East Prussia.

According to former Junkers test pilot Hans-Joachim Pancherz' logbook, the Ju 390 V1 was brought to Prague immediately after it had been displayed at Insterburg, and while there took part in a number of test flights, which continued until March 1944, including tests of inflight refueling.

The Ju 390 V1 was returned to Dessau in November 1944, where it was stripped of parts and finally destroyed in late April 1945 as the American Army approached.

The Ju 390 V2 was assembled in Bernburg, was first flown in October 1943, and is said to have been configured for the maritime reconnaissance role. Its fuselage had been extended by 2.5 m (8.2 ft), and it was equipped with FuG 200 Hohentwiel ASV (Air to Surface Vessel) radar and defensive armament consisting of five 20 mm MG 151/20 cannon. Green notes different armament, specifically four 20 mm MG 151/20s and three 13 mm (.51 in) MG 131 machine guns.

Test pilot Oberleutnant Eisermann recorded in his logbook that he flew the V2 prototype (RC+DA) as late as February 1945. However, Kössler and Ott state that the Ju 390 V2 was only completed during June 1944, with flight tests beginning at the end of September 1944.

A Ju 390, which may or may not have been the V2, is claimed by some to have made a test flight from Germany to Cape Town in early 1944. The sole source for the story is a speculative article which appeared in the Daily Telegraph in 1969 titled "Lone Bomber Raid on New York Planned by Hitler", in which Hans Pancherz reportedly claimed to have made the flight in question. Author James P. Duffy has carried out extensive research into this claim, which has proved fruitless. Kössler and Ott make no mention of this claim either, despite having themselves interviewed Pancherz.

The first public mention of an alleged flight of a Ju 390 to North America appeared in a letter published in the November 1955 issue of the British magazine RAF Flying Review, of which aviation writer William Green was an editor. The magazine's editors were skeptical of the claim, which asserted that two Ju 390s had made the flight, and that it included a one-hour stay over New York City. In March 1956, the Review published a letter from an RAF officer which claimed to clarify the account. Citing unspecified German aircraft records in his possession, the officer said that only one aircraft, the Ju 390 V1 prototype, had made the flight in the latter part of 1944, and that it had reached a point about 19 km (12 mi) off the US east coast, just north of NYC, before returning to France.

According to Green's reporting, in June 1944, Allied Intelligence had learned from prisoner interrogations that a Ju 390 had been delivered in January 1944 to FAGr 5 (Fernaufklärungsgruppe 5), based at Mont-de-Marsan near Bordeaux, and that it had completed a 32-hour reconnaissance flight to within 19 km (12 mi) of the US coast, north of New York City. This was, however, rejected just after the war by British authorities.[Aviation historian Dr. Kenneth P. Werrell states that the story of the flight originated in two British intelligence reports from August 1944 which were based in part on the interrogation of prisoners, and titled "General Report on Aircraft Engines and Aircraft Equipment"; the reports claimed that the Ju 390 had taken photographs of the coast of Long Island. These photos have never been discovered.

The claimed flight was mentioned in many books following the RAF Flying Review account, including William Green's own respected Warplanes of the Second World War (1968) and Warplanes of the Third Reich (1970) but without ever citing reliable sources. Further authors then cited Green's books as their source for the claimed flight. Green himself told Kenneth P. Werrell many years later that he no longer placed much credence in the flight.

Werrell himself later examined the available data regarding the Ju 390's range and concluded that although a great circle round trip from France to St. Johns, Newfoundland was possible, adding another 3,830 km (2,380 mi) for a round trip from St. Johns to Long Island made the flight "most unlikely".

Karl Kössler and Günter Ott, in their book Die großen Dessauer: Junkers Ju 89, 90, 290, 390. Die Geschichte einer Flugzeugfamilie ("Great Dessauers...History of an Aircraft Family"), also examined the claimed flight, and thoroughly debunked the flight north of New York. Most importantly, it was nowhere near France at the time when the flight was supposed to have taken place. According to Hans Pancherz' logbook, the Ju 390 V1 was brought to Prague on 26 November 1943. While there, it took part in a number of test flights, which continued until late March 1944.

Secondly, they also assert that the Ju 390 V1 prototype was unlikely to have been capable of taking off with the fuel load necessary for a flight of such duration due to strength concerns caused by its modified structure; it would have required a takeoff weight of 65 tonnes (72 tons), while the maximum takeoff weight during its trials had been 34 tonnes (38 tons). According to Kössler and Ott, the Ju 390 V2 could not have made the US flight either, since they indicate that it was not completed before September/October 1944.

Design work was carried out on a bomber-reconnaissance version of the aircraft. Considerable interest was displayed in this ultra-long range aircraft by the Imperial Japanese Army Air Force. In the autumn of 1944, the Japanese government acquired a manufacturing license for the Ju 390 A-1. Under the licensing agreement, detailed manufacturing drawings were scheduled to be handed over to the Imperial Japanese Army's representative, Major-General Otani, by February 28, 1945.

There is no record of this part of the agreement having been fulfilled. No reference can be found to this Major General Otani mentioned by Russian historians, however ULTRA decrypts of diplomatic signals from Japan's embassy in Berlin concerning the voyage of Japanese submarine I-52 refer to a General Kotani in Germany requiring return passage in connection with transport back to Japan. These same signals refer to other passengers with higher priority. 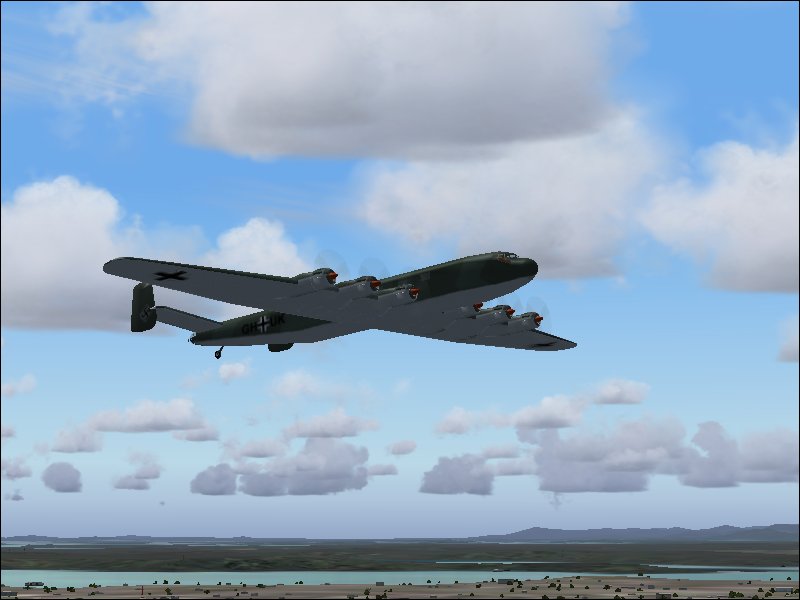